Pledge-Taking Ceremony in Connection with Anti-Terrorism Day Every year, May 21 is observed as Anti-Terrorism Day throughout the country. It has decided that the ‘pledge taking ceremony’ in the offices of the Central Government will be on May 21 , 2014. The following is the pledge to be taken. For Hindi Version of the pledge click here 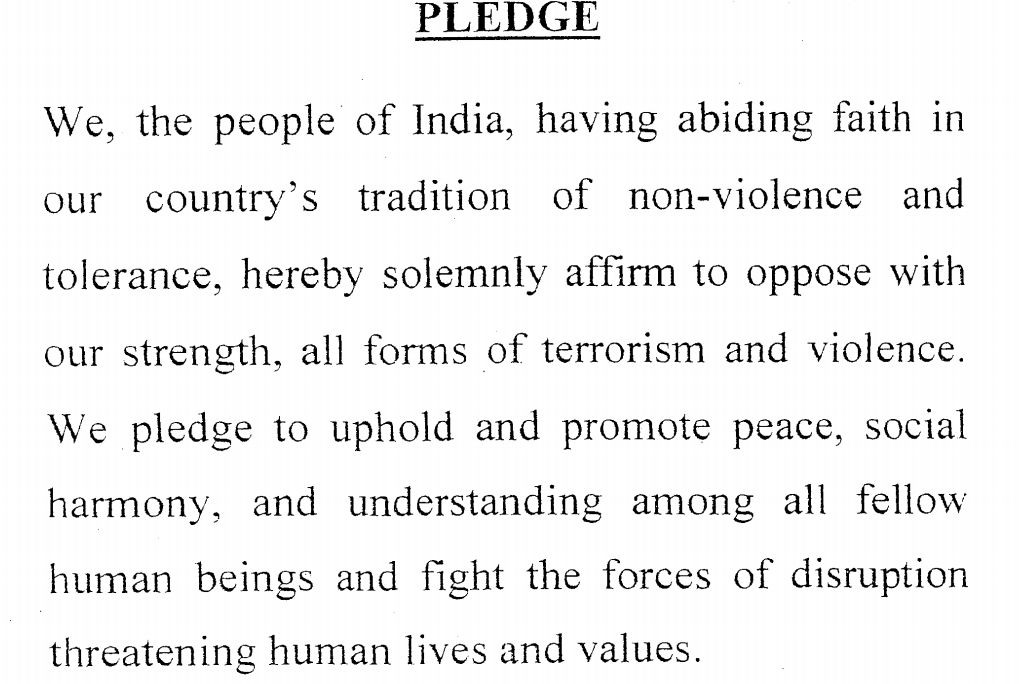 Terrorists are usually young, while the brains behind them are old, seasoned politicians who co-ordinate and guide their activities. They are fanatics and extremists who act with great fervor and zeal, but studies reveal that if apprehended alive, a terrorist loses his fervor as quickly as he had acquired it. When he has time to think, he feels he has been stupid or that he was misled. We have to disabuse our minds that terrorists who belong to the political class are patriots. All international studies consign them to the category of murderers, rapists or highway robbers. Terrorism has no place in a democracy which is based on the belief that all problems can be solved through negotiations. Government can also be changed through the ballot box.

Terrorism is a world-wide problem. It is there in the middle-east and in most countries of Europe. Very often it is seen that terrorist groups receive money, weapons, training and guidance, from other countries and this enables them to attain a high level of performance. In the case of the Punjab terrorists, there were no doubt they were receiving training, weapons, sanctuary and other forms of material assistance from Pakistan. It was not an easy job to seal the long border completely and prevent flow of arms to the terrorists, but through strong and determined steps, thus terrorists are completely flushed out and peace is restored in Punjab.

For dealing with these terrorists, the government had to arm itself with greater powers. The anti-terrorist act passed by the parliament provides for deterrent punishment for terrorist acts. The act also provides punishment for “disruptive activities” which have been defined as any action taken to disrupt the sovereignty or the territorial integrity of the nation. Earlier, the parliament had passed laws amending the arms act to curb unauthorized access to arms and ammunition. The act lies down that possession of unlicensed or unauthorized arms in disturbed areas will entail a minimum punishment of imprisonment for a period of three years. The minimum punishment earlier provided in the act was merely six months. The national police commission, in its report, had rightly advocated the enactment of a new arms act to provide for stricter conditions for the issue of licenses and enhanced responsibilities on the part of the licenses for security and accountability of ammunition. Laws have also been enacted to prohibit the use of religious places for political purposes or for hiding and sheltering anti-social elements. Stringent punishment is to be meted out in case of misuse of a religious place.

The series of bomb blasts in Delhi and neighboring states and spate of murders of eminent personalities show how difficult it is to curb terrorist activities. The Punjab terrorists were an organized group working to achieve ‘Khalistan‘ or a separate Sikh state under the guidance and inspiration of late Sant Bhinderawale and others like him. After “operation blue star” it was hoped that the extremist activities in Punjab would be successfully encountered, as it was through that without a protected sanctuary it would become difficult for the extremists to carry on their acts of sabotage and violence. However the assassination of late Mrs. Indira Gandhi was the direct consequence of “operation blue star”. After the “operation blue star” the terrorists again re-grouped and entrenched themselves in the golden temple. However “the operation black thunder” was a complete success and terrorists and anti-social elements were flushed out. The sanctity of the golden temple was restored again.

Terrorism could not, and it cannot, be curbed by the law enforcing agencies alone. It was the tact, prudence and sagacity of the late Prime Minister Rajiv Gandhi and Sant Longowal which, after protracted negotiations, resulted in the historic Punjab accord which not only gave a knockout blow to terrorism but also saved the nation from disintegration. No doubt, the Sant paid for it with his life, but it ushered in an era of cooperation instead of confrontation in Punjab and Kashmir. However, elections have been held successfully in the state, and a popularly elected chief minister is now at the helm of affair. The terrorists have lost the sympathy and co-operation of the people and they stand isolated. Let us hope that the country would be entirely free from this menace very soon.

Anti Terrorism Day [21st May 2014] Pledge in Hindi and English