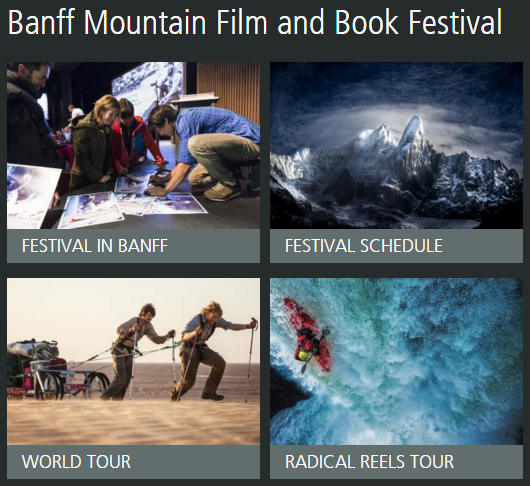 The Festival happens over nine days each fall and features stories of profound journeys, nexpected adventures and ground-breaking expeditions told by renowned authors, photographers,adventurers and filmmakers from around the globe. Days after the Festival, our World Tour launches, bringing films to fans in over 40 countries.

The Banff Mountain Film Festival is an international film competition and an annual presentation of short films and documentaries about mountain culture, sports, and environment. It was launched in 1976 as The Banff Festival of Mountain Films by The Banff Centre and is held every fall in Banff, Alberta. Held concurrently is the Banff Mountain Book Festival which brings the spirit of mountain literature to Banff, and features guest speakers, readings, seminars, and an international book competition.

Immediately after the festival in November, a selection of the best films entered in the festival goes on tour. The host organization in each tour location chooses a program that reflects the interests of their community. Each community creates a unique celebration of local adventure and adventurers. The World Tour visits approximately 305 cities annually in 20 countries, reaching over 220,000 audience members.

In October and November the Radical Reels Tour will travel around Australia screening 9 entirely new films in 15 cities.

Radical Reels is kind of like the adrenaline loving younger brother of the Banff Mountain Film Festival screening a collection of short films focusing on mountain adrenaline action sports.

Who is a Mountain Idol?
Mountain Idols are young individuals who excel in their mountain sport (alpine and Nordic skiing, snowboarding, climbing, trail running, biking, paragliding, adventure racing, etc.). They elevate the positioning of their sport in the Bow Valley’s community, exemplify the outdoor lifestyle, and are valued role models and mentors of the Bow Valley outdoor community. Successful candidates will be males or females under 23 years of age who currently reside in the geographic area between Lake Louise and Exshaw.

Antarctica: On the Edge

Haida Gwaii: On The Edge Of The World

Hunters of the South Seas: The Whale Hunters of Lamalera

Island of the Marble Glaciers

A Line Across the Sky

Moving the Giants: An Urgent Plan to Save the Planet

NOATAK: Return to the Arctic

Of Fells and Hills

One Seventy Eight: Forging a Balance

Paddle for the North

The Search for Freedom

Sierra Quitiquit How Did I get Here : Empowerment

Streif – One Hell of a Ride

Via Ferrata – on a Mountain Bike

The Warmth of Winter