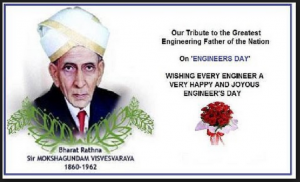 In India, Engineer’s day is celebrated every year on September 15 in remembrance of Sir Mokshagundam Visvesvaraya, the most outstanding Engineer of all times. He is popularly known as Sir MV; born on 15 September 1860 was a notable Indian engineer, thus it is celebrated on this day 🙂

He was a notable Indian engineer, scholar, statesman and the Diwan of Mysore during 1912 to 1918. He was a recipient of the Indian Republic’s highest honour, the Bharat Ratna, in 1955. He was knighted as a Knight Commander of the Indian Empire (KCIE) by King George V for his contributions to the public good. Every year, 15 September is celebrated as Engineer’s Day in India in his memory. He is held in high regard as a pre-eminent engineer of India. He was the chief designer of the flood protection system for the city of Hyderabad in Telangana, as well as the chief engineer responsible for the construction of the Krishna Raja Sagara dam in Mandya. The Engineering fraternity of India celebrates “Engineer’s Day” every year on 15th of September. It was this day 147 years ago that this great contributor to growth and engineering was born. Every year the celebration of the Engineer’s Day revolves around a central theme that is notified to all states and local centers.

“World-class” engineers denotes the engineers of tomorrow with a broad range of competencies and skills to synthesize new ideas; and develop new processes and technologies to address contemporary challenges to suit global needs anywhere in the world. The word “World-class” is a relative term and is very difficult to define as there is no datum or fixed standard to classify any engineering work as “World-class”. The phrase has different connotations in countries from different categories, viz. Developed, Developing and Under-developed, based on their economic and social standards.However, the engineers, who are the harbinger of development of any country, always strive for enrichment of their knowledge and skill to upgrade the quality of life and their performance. The pursuit for betterment is a continuous process. There is no end to development and engineering progress. The process of upgradation from one standard to the other, from ‘under-developed’ to ‘developing’, or from ‘developing’ to ‘developed’, is a continuous process, which is led by the engineers after taking into account the prevailing sociopolitico- economic conditions of the particular country.

Engineers are key figures in the material progress of the world.
Happy Engineer’s Day

Happy Engineer’s Day to all Engineers of India and whole world.

There’s nothing I believe in more strongly than getting young people interested in science and engineering, for a better tomorrow, for all humankind.
-Bill Nye

Right now people are interested in genetic engineering to help the human race. That’s a noble cause, and that’s where we should be heading. But once we get past that – once we understand what genetic diseases we can deal with – when we start thinking about the future, there’s an opportunity to create some new life-forms.
-Jack Horner

Most times your computer is not responding as you expected – first try to find out if the “ERROR” is not sitting right next to the computer.
– Thomas Baehr A very warm welcome and Good morning to all the dignitaries on dice, faculty, staff and mydear friends, today we all gathered here to celebrate 47th engineer’s day. In India, this day iscelebrated by engineering fraternity on 15th of September, every year.The date was selected because it is the birthday of legendary engineer Dr. MokshagundamVisvesvaraya(M. Visvesvaraya). It was this day 152 years ago that this great contributor togrowth and engineering was born.
He is known to be the greatest engineers of all times, who withhis vision and dedication in the field of engineering made some exceptional contributions to India.
Owing to his contribution he was honored with the highest state award of India, the “The BharatRatna”, in the year 1955.
He was internationally recognized for his genius in harnessing waterresources, successful design and construction of several river dams, bridges and implementingirrigation and drinking water schemes all over India.Each letter in the word Engineer has its own meaning i.e.
E- eager,
N-nonstop learning,
G- genius,
I-Intelligent,
N-Nation’s Builder,
E-effort maker,
E – excellence,
R- rider.

Sir Mokshagundam Visvesvaraya is known to be the greatest engineers of all times, who with his vision and dedication in the field of engineering made some exceptional contributions to India. Owing to his contribution he was honored with the highest state award of India, the “The Bharat Ratna”, in the year 1955. Some of the contributions of Sir VM are:
As an Engineer par excellence:

He was the chief engineer during the construction of Krishna sager dam on the Cauvery River.

Many dams built by him in Bombay are still functional even till today.

The Sri Jayachamaraja Polytechnic Institute of Bangalore was started on the recommendation of Sir Visvesvaraya.

The Block System was invented by him, which was a system of automated doors that closed in the conditions of overflow.

Krishnarajasagara Dam built by his help, is still praised by everybody witnessing it.

Mysore University, which is a matter of great proud for the people of Mysore, was established because of his will and conviction. What was achieved by Sir Visvesvaraya, was not as easy as it seemed, as it required strict discipline from his side.

Punctuality: He was very famous for his punctuality, it’s said He was never late even by a minute and expected his people also to realize the importance of time.

Perfectionist: There are many examples to show that even a little task that he took up, was always completed to perfection. Even if it was to deliver a speech, he would think in advance, write and rehearse it number of times.

Fitness: Even at the age of 92, he was never dependent on comforts; he would not only walk by himself, but, take full participation in all proceedings.

Dedication to work: Nothing was able to deter Sir, from his commitment to good work; his work was his worship.

Courageous: Many of the projects completed by him that India stands proud of today, would not have existed if it was not his will and conviction.

Fearless Patriot: When it came to India, even high perks given to Sir by the British Government were not enough for him; he opposed everything and anything that was against the favor of his nation.

An engineer dies and reports to the pearly gates. St. Peter checks his dossier and says, “Ah, you’re an engineer — you’re in the wrong place.”

So, the engineer reports to the gates of hell and is let in. Pretty soon, the engineer gets dissatisfied with the level of comfort in hell, and starts designing and building improvements. After awhile, they’ve got air conditioning and flush toilets and escalators, and the engineer is a pretty popular guy.

One day, God calls Satan up on the telephone and says with a sneer, “So, how’s it going down there in hell?”

Satan replies, “Hey, things are going great. We’ve got air conditioning and flush toilets and escalators, and there’s no telling what this engineer is going to come up with next.”

God replies, “What??? You’ve got an engineer? That’s a mistake — he should never have gotten down there; send him up here.”

Satan says, “No way. I like having an engineer on the staff, and I’m keeping him.”

Satan laughs uproariously and answers, “Yeah, right. And just where are YOU going to get a lawyer?”
– Unknown