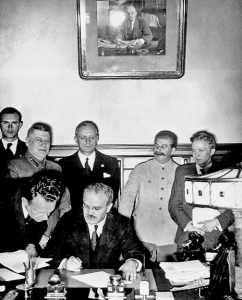 What is Black Ribbon Day?

Black Ribbon Day, also called the European Day of Remembrance for Victims of Stalinism and Nazism, originated in the 1980s.

Central and Eastern European refugees then living in Canada organized a series of peaceful protests on both sides of the Iron Curtain to draw attention to the rampant human rights abuses perpetrated by authorities across the Soviet bloc.

They chose August 23, the anniversary of the infamous 1939 Molotov-Ribbentrop Pact between the Soviet Union and Nazi Germany to hold the annual rallies.

On August 23, 1989, about 2 million people formed a human chain spanning more than 600 kilometers across the Baltic republics.

Known as the Baltic Way, this protest is seen as a defining moment in the Baltic states’ battle for independence from the Soviet Union.

As the Soviet bloc crumbled in 1991, Black Ribbon Day demonstrations were held in as many as 56 cities around the world.

August 23 – decision by the European Parliament to create a Day of Remembrance for the 20ths century victims of European totalitarianism – Nazism, Fascism, and Communism – and to choose the date of August 23.

Today, Black Ribbon Day commemorates both victims of Stalinism and Nazism and, more generally, all those who died, suffered, or perished under authoritarian regimes.

Black ribbons are seen as a universal symbol of remembrance and have been widely used to mourn tragedies.

Black ribbons, for instance, are worn to honor U.S. military personnel made prisoner of war or listed as missing in action.

Recalling the initiative of the European Parliament to proclaim 23 August, when the Ribbentrop–Molotov Pact was signed 75 years ago, as a Europe-wide Day of
Remembrance for Victims of Stalinism and Nazism, in order to preserve the memory of the victims of mass deportations and exterminations,

The OSCE Parliamentary Assembly:
Reconfirms its united stand against all totalitarian rule from whatever ideological background;
Calls on participating States to honour and implement all commitments undertaken in good faith;
Urges the participating States:
to continue research into and raise public awareness of the totalitarian legacy;
to develop and improve educational tools, programmes and activities, most notably for younger generations, on totalitarian history, human dignity, human rights and fundamental freedoms, pluralism, democracy and tolerance;
to promote and support activities of NGOs which are engaged in areas of research and raising public awareness about crimes committed by totalitarian regimes;
. Requests governments and parliaments of participating States to ensure that any governmental structures and patterns of behaviour that resist full democratisation or perpetuate, or embellish, or seek a return to, or extend into the future, totalitarian rule are
fully dismantled;

Black ribbons are also worn to raise awareness of health issues such as melanoma, eating disorders, and narcolepsy, as well as to protest against torture.

The European Parliament has proclaimed 23 August 2009, the anniversary of the Molotov–Ribbentrop Pact, as a European Day of Remembrance for Victims of Stalinism and Nazism, to be commemorated with dignity and impartiality.

The Molotov–Ribbentrop Pact, named after the Soviet foreign minister Vyacheslav Molotov and the Nazi German foreign minister Joachim von Ribbentrop, officially the Treaty of Non-aggression between Germany and the Union of Soviet Socialist Republics, and also known as the Ribbentrop–Molotov Pact or Nazi–Soviet Pact, was a non-aggression pact signed in Moscow in the late hours of 23 August 1939

In connection with the Molotov–Ribbentrop Pact, an Organization for Security and Co-operation in Europe parliamentary resolution condemned both communism and fascism for starting World War II and called for a day of remembrance for victims of both Stalinism and Nazism on 23 August.In response to the resolution, the Russian lawmakers threatened the OSCE with “harsh consequences”.

During the re-ignition of Cold War tensions in 1982, the U.S. Congress during the Reagan Administration established the Baltic Freedom Day to be remembered every June 14 in the United States