Besides landing in the middle of a huge street party, international visitors arriving in the Netherlands on Koningsdag may feel as if they have taken a wrong turn and ended up at a riotous bazaar.

King’s Day is a national holiday in the Netherlands, and largely known for its nationwide vrijmarkt (‘free market’). Every inch of the pavement in every city, town and village in the Netherlands is taken up with people squatting on rugs and plastic selling off mostly useless but strangely intriguing bric-a-brac for bargain prices. Children are often keen to hold their own stalls, selling home-made cakes and toys needing a new home. Among the King’s Day mayhem, semi-professional and amateur bands blast out beats from just about every street corner, while orange-clad King’s Day revellers wander the streets with drinks in hand. 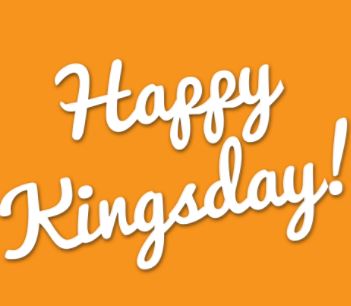 Oranje bitter – a bright orange liqueur – is the typical drink for toasting the king on King’s Day. The colour comes from soaking orange peels in jenever (a type of gin), originally created in the 1620s to celebrate the Dutch Prince Fredrick Henry’s victory over Spanish rule and has increasingly become associated with the royal family since William of Orange became the first king. You’ll hear crowds singing the anthem of the day, Het Wilhelmus, a poem about the life of William of Orange and his fight for the Dutch nation, written in 1574.

King’s Day is a public holiday but certainly not a day of rest. The Dutch, expats and tourists alike flock to Amsterdam for a day of celebration. The fun traditionally begins on the eve of the big day (King’s Night) with the carnival atmosphere continuing throughout the city on King’s Day. DJs play parties on public squares, brightly decorated boats fill canals and live music spills onto streets from cafe patios.

Amsterdam celebrated King’s Day (Koningsdag) for the first time in 2014, after the inauguration of King Willem-Alexander on 30 April 2013 (what was then still Queen’s Day).

The royal celebrations were first held on 31 August 1885 in honour of the birth of Queen Wilhelmina, and the Queen’s Day (Koninginnedag) tradition was born. After Wilhelmina’s daughter (Juliana) succeeded to the throne in 1949, the day was changed to 30 April in accordance with the new Queen’s birthday.

When she became queen, the now Princess Beatrix chose to retain the day in honour of her mother but as of 2014, King’s Day is officially celebrated on 27 April (the king’s birthday).

The name may have changed slightly but the festive spirit of the day is sure to remain! You’ll be treated to a sea of orange as everyone – and their pet – is covered head to toe in oranje (orange) as a show of pride for the Dutch Royal family, the House of Orange-Nassau.

Every year, the royal entourage visits a town or municipality in the Netherlands as part of the celebrations.

Orange is worn on King’s Day as a show of pride for the Dutch royal family – the House of Orange-Nassau. So raid your wardrobe, your friends’ wardrobes, your local charity shop and anywhere else you can think of for oranje clothes and accessories, and wear them with pride. If you’re not covered head to toe in orange on King’s Day, you’re not doing it right. Orange wigs and face paint also get a big thumbs up – the wackier the better. Yes, you’ll look like a crazy person. But thankfully, so will everybody else.

King’s Day in the entire country
On 27 April, all of Holland is a party! From the biggest cities down to the smallest hamlets, the entire country celebrates King’s Day. There are street markets everywhere, where people sell all kinds of miscellany and (home-made) treats. Bands are playing on every street corner, every pub is serving beer outside and all around, people are dancing in their orange outfits. Tradition dictates that the Royal family visits one or two municipalities in Holland on this day, so with any luck, you might see them yourself!

King’s Day is certainly celebrated with tremendous exuberance in the capital of Holland, Amsterdam. Activities abound throughout the city; there is a huge street market of rugs and stalls where people sell all kinds of items and others show off artistic skills. The canals are thronged with boats with partying people, and for those who like a good dance, there are plenty large parties with famous DJs.

King’s Day in The Hague
In the city of The Hague, centre of the courts of Holland, King’s Day is celebrated as it should be celebrated, too. Street markets abound here too, of course, and the hustle and bustle is especially spirited around the canals, Statenkwartier and Noordeinde. What The Hague is most known for, however, is King’s Night, the night before King’s Day, when its various squares – Kerkplein, Grote Markt and Plaats, among others – play host to well-known bands and DJs.

King’s Day in Utrecht
In Utrecht, the street markets are open for you to enjoy starting the evening before King’s Day, 26 April, from 18:00 on. On the 27th there is, of course, a deeply convivial atmosphere to be enjoyed, with a myriad decorated boats on the canals and fun parties and gigs on squares such as Domplein, Lucasbolwerk, Mariaplaats, Neude and Janskerkhof.

King’s Day in Eindhoven
Just like in The Hague, Eindhoven has a score of entertaining shows for you to enjoy on its squares the evening before King’s Day: on Wilhelminaplein, Stationsplein and Stadhuisplein. King’s Day itself is especially enjoyable, with street markets around Mathildelaan, Strijp-S and the squares we just named.

Funfairs on King’s Day
In addition to the street markets and music, King’s Day tradition also calls for funfairs. Every year, therefore, there are funfairs to be found in a great many municipalities. The best-known funfairs are those at Dam Square in Amsterdam, Grote Markt square in Haarlem, Schiehaven harbour in Rotterdam and around Lange Voorhout in The Hague.

During King’s Day 2018 there are five large-scale music events on the outskirts of the city.