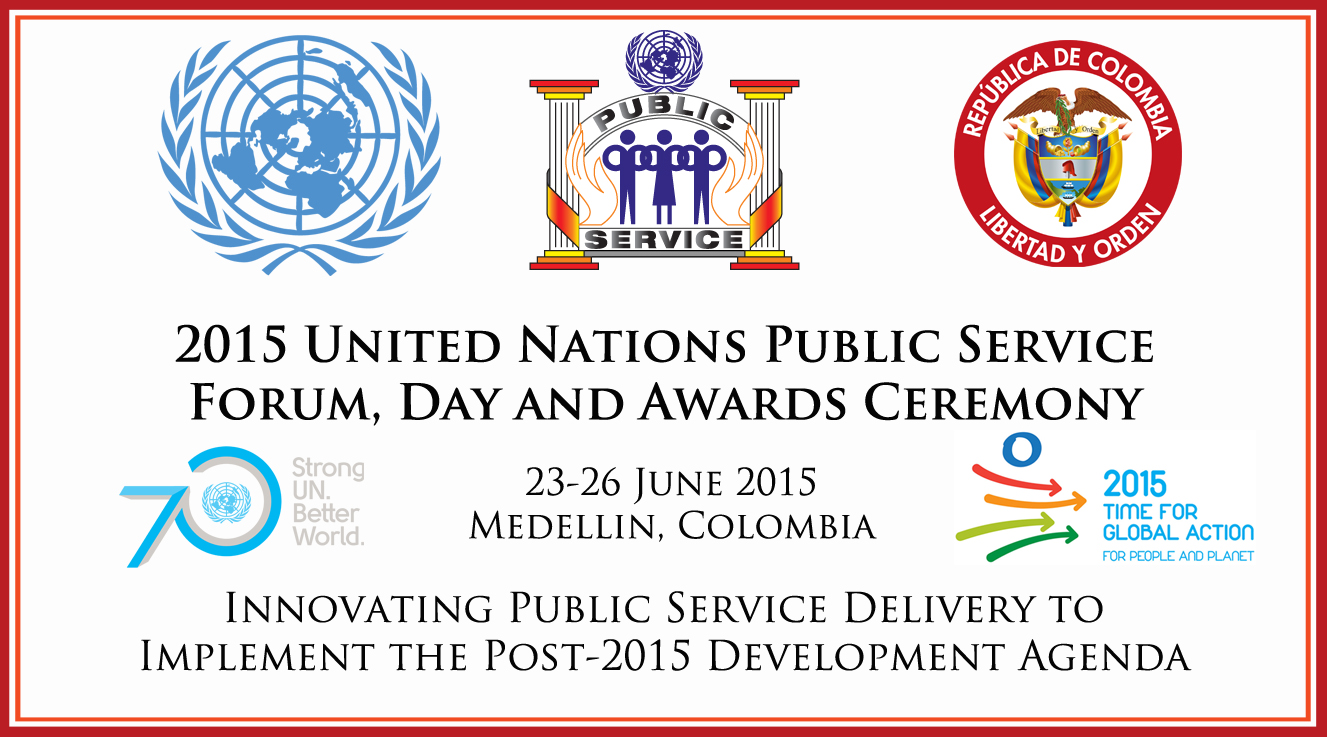 The United Nations’ Public Service Day is held on June 23 each year. It recognizes that democracy and successful governance are built on the foundation of a competent civil service. The day aims to celebrate the value and virtue of service to the community.

The 2015 United Nations Public Service Forum, Day and Awards Ceremony will take place in Medellin, Colombia at the Plaza Mayor Medellin Convention and Exhibition Center from 23 to 26 June 2015. Focusing on the theme “Innovating Public Service Delivery to Implement the Post-2015 Development Agenda”, the Forum will be organized by the United Nations Department of Economic and Social Affairs (UNDESA), Division for Public Administration and Development Management (DPADM), in partnership with the United Nations Entity for Gender Equality and the Empowerment of Women (UN Women) in collaboration with the hosting Government of the Republic of Colombia.

In line with the search for Sustainable Development, the United Nations is dedicated to promoting exchange of experiences, ideas and best practices concerning innovations in governance and public administration in order to contribute to social, economic, and environmental development. The General Assembly itself has reiterated, in resolution 57/277, that particular emphasis should be given to the exchange of experience related to the role of public administration in the implementation of internationally agreed goals, including those contained in the Millennium Declaration. In resolution 50/225, it also underlined the importance of enhancing international cooperation in the field of public administration, including South-South and inter-regional cooperation.
The United Nations (UN) holds a Public Service Awards ceremony each year. It rewards the creative achievements and contributions of public service institutions worldwide. This event promotes the role, professionalism and visibility of public service. At the same time, Africa Public Service Day is celebrated in Africa to coincide with the United Nations Public Service Day.

Many public service organizations and departments around the world celebrate this day by holding various events to recognize the valuable role that public servants play in making improvements in society. Activities include: information days featuring stalls and booths about the public service; organized lunches with guest speakers; internal awards ceremonies within public service agencies or departments; and special announcements to honor public servants.

Public Service Day is a global observance and not a public holiday.

United Nations Public Service Day is an official UN observance held on June 23 each year. It was designated in the resolution 57/277 of the UN General Assembly issued on March 7, 2003 and has been celebrated annually ever since.
The term “public service” refers to any service provided by government to people living within its jurisdiction. In modern developed countries, it typically includes (but is not limited to) education, health care, public transportation, social service, emergency services, law enforcement etc.

Public Service Day was established to celebrate the value and virtue of public service to community. It also focuses on raising awareness of the contribution of public service to the development of society and honoring the work of public servants. Events held on the occasion aim at encouraging young people to pursue careers in the public sector.

The United Nations Public Administration Network (UNPAN) uses a special logo for Public Service Day. It features two columns, one on the left side and one on the right side, and in between are a pair of hands outlined in orange in a flame-like manner. These hands surround three blue human figures. The figure in the middle depicts a woman and the two other figures, one on each side of the woman, are male. The word “Public”, which joins the two columns, is written above the heads of the figures, which are standing on or supported by the word “Service” in capital letters, which joins the two columns. A smaller version of UNPAN’s main logo is located above the word “Public”.

UNPAN’s main logo, in blue and white, is similar to the logo on the UN flag. It features a projection of a world map (less Antarctica) centered on the North Pole, enclosed by olive branches. The olive branches are a symbol for peace, and the world map represents all the people of the world.
Did you know that there are over 200 million youth with disabilities in the world today? Let’s make sure our societies benefit from the potential of a fully empowered population including Persons with Disabilities!
Follow and share your views on important issues concerning persons with disabilities around the world using ‪#‎ForPeople‬.
For more information on the “For Inclusion. For Equality. ForPeople. 2015 – Time for Global Action” campaign visit: unsdn.org/forpeople

Anzac Day 2016 – What is Anzac Day
Prev Article Next Article