All Saints’ Day is a Christian holiday celebrated on November 1 by parts of Western Christianity, and on the first Sunday after Pentecost in Eastern Orthodox Christianity, in honor of all the saints, for example Saint Nicholas (right). 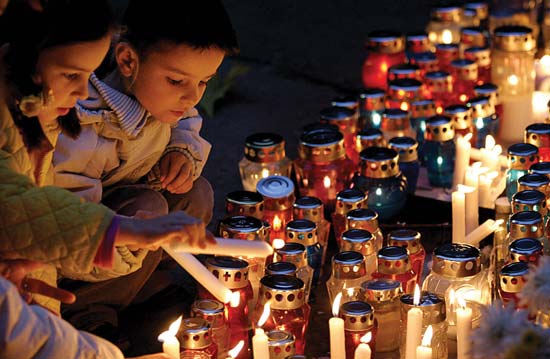 Netherlands
In the Netherlands, this holiday is observed on the first Sunday in November, but it is not a public holiday.

Colombia
In Colombia, the holiday is celebrated on the Monday on or after 1 November.

All Saints’ Day, feast of the Roman Catholic and Anglican churches, and day on which churches glorify God for all God’s saints, known and unknown. It is celebrated on Nov. 1 in the West, since Pope Gregory IV ordered its church-wide observance in 837. Its origin lies earlier in the common commemorations of martyrs who died in groups or whose names were unknown, which were held on various days in different parts of the Church; over time these celebrations came to include not only the martyrs but all saints. During the Reformation the Protestant churches understood “saints” in its New Testament usage as including all believers and reinterpreted the feast of All Saints as a celebration of the unity of the entire Church. In medieval England the festival was known as All Hallows, hence the name Halloween [ = All Hallows’ eve ] for the preceding evening.

In Western Christian theology, the day commemorates all those who have attained the beatific vision in heaven. It is a national holiday in many historically Roman Catholic countries. In the Catholic Church and many Anglican churches, the next day specifically commemorates the departed faithful who have not yet been purified and reached heaven.

Some Christians who celebrate All Saints’ Day and All Souls’ Day do so with the belief that there is a prayerful spiritual bond between those in purgatory (the ‘Church Suffering’), those in heaven (the ‘Church triumphant’), and the living (the ‘Church militant’). Other Christian traditions define, remember and respond to the saints in different ways; for example, in the Methodist Church, the word “saints” refers to all Christians and therefore, on All Saints’ Day, the Church Universal, as well as the deceased members of a local congregation, are honored and remembered.

The Pope dedicated the day as a holiday to honour the Blessed Virgin and all the martyrs.

During the reign of Pope Gregory III, the festival was moved to 1 November and was expanded to include the honouring of all saints.

The day survived the Reformation, though the Protestants combined it with All Souls’ Day, which was on 2 November.

The day was abolished as a church festival in 1770, but may be celebrated by many churches on the first Sunday in November.

In the year 731 AD, 1 November was designated a day of remembrance for saints of the church who had no days of their own. From the 11th century, 2 November was dedicated to all the dead, of whatever standing, and was called All Souls’ Day. It was widely observed by the populace, with requiems and bell-ringing, but was abolished with the arrival of the Reformation. In 1772, All Saints’ Day in Sweden was moved to the first Sunday in November and in 1953 to the Saturday between 31 October and 6 November.

Eastern Christians of the Byzantine Tradition commemorate all saints collectively on the first Sunday after Pentecost, All Saints’ Sunday. The feast of All Saints achieved great prominence in the ninth century, in the reign of the Byzantine Emperor, Leo VI “the Wise” (886–911).

His wife, Empress Theophano—commemorated on 16 December—lived a devout life. After her death in 893, her husband built a church, intending to dedicate it to her. When he was forbidden to do so, he decided to dedicate it to “All Saints”, so that if his wife were in fact one of the righteous, she would also be honored whenever the feast was celebrated. According to tradition, it was Leo who expanded the feast from a commemoration of All Martyrs to a general commemoration of All Saints, whether martyrs or not.

This Sunday marks the close of the Paschal season. To the normal Sunday services are added special scriptural readings and hymns to all the saints (known and unknown) from the Pentecostarion.

In addition to the Sundays mentioned above, Saturdays throughout the year are days for general commemoration of all saints, and special hymns to all saints are chanted from the Octoechos.

In the Maronite Catholic Church, the Sunday of the Righteous and Just is the traditional Maronite feast in honor of all saints.
In the 1900s, however, people began putting lighted candles on the graves of the departed on All Saints’ Day. This custom originated with wealthy families in towns and cities. But after the World War II, it spread throughout the country. Churches also began holding services of light to mark the day.

The Western Christian holiday of All Saints’ Day falls on 1 November, followed by All Souls’ Day on November 2, and is a Holy Day of Obligation in the Latin Rite of the Catholic Church. The origin of the festival of All Saints celebrated in the West dates to 13 May 609 or 610, when Pope Boniface IV consecrated the Pantheon at Rome to the Blessed Virgin and all the martyrs; the feast of the dedicatio Sanctae Mariae ad Martyres has been celebrated at Rome ever since. There is evidence that from the fifth through the seventh centuries there existed in certain places and at sporadic intervals a feast date on 13 May to celebrate the holy martyrs.

The origin of All Saints’ Day cannot be traced with certainty, and it has been observed on various days in different places. However, there are some who maintain the belief that it has origins in the pagan observation of 13 May, the Feast of the Lemures, in which the malevolent and restless spirits of the dead were propitiated. Liturgiologists base the idea that this Lemuria festival was the origin of that of All Saints on their identical dates and on the similar theme of “all the dead”.

The feast of All Saints, on its current date, is traced to the foundation by Pope Gregory III (731–741) of an oratory in St. Peter’s for the relics “of the holy apostles and of all saints, martyrs and confessors, of all the just made perfect who are at rest throughout the world”, with the day moved to 1 November and the 13 May feast suppressed. This fell on the Celtic holiday of Samhain, which had a theme similar to the Roman festival of Lemuria, but which was also a harvest festival.

The Irish, having celebrated Samhain in the past, did not celebrate All Hallows Day on this 1 November date, as extant historical documents attest that the celebration in Ireland took place in the spring: “…the Felire of Oengus and the Martyrology of Tallaght prove that the early medieval churches [in Ireland] celebrated the feast of All Saints on April 20.”

A November festival of all the saints was already widely celebrated on 1 November in the days of Charlemagne. It was made a day of obligation throughout the Frankish empire in 835, by a decree of Louis the Pious, issued “at the instance of Pope Gregory IV and with the assent of all the bishops”, which confirmed its celebration on 1 November. The octave was added by Pope Sixtus IV (1471–1484).

The festival was retained after the Reformation in the calendar of the Anglican Church and in many Lutheran churches. In the Lutheran churches, such as the Church of Sweden, it assumes a role of general commemoration of the dead. In the Swedish calendar, the observance takes place on the Saturday between 31 October and 6 November.

In many Lutheran Churches, it is moved to the first Sunday of November. In the Church of England it may be celebrated either on 1 November or on the Sunday between 30 October and 5 November. It is also celebrated by other Protestants of the English tradition, such as the United Church of Canada, the Methodist churches, and the Wesleyan Church.

Protestants generally regard all true Christian believers as saints and if they observe All Saints Day at all they use it to remember all Christians both past and present. In the United Methodist Church, All Saints’ Day is celebrated on the first Sunday in November. It is held, not only to remember Saints, but also to remember all those who have died who were members of the local church congregation.

In some congregations, a candle is lit by the Acolyte as each person’s name is called out by the clergy. Prayers and responsive readings may accompany the event. Often, the names of those who have died in the past year are affixed to a memorial plaque.

In many Lutheran churches, All Saints’ Day and Reformation Day are observed concurrently on the Sunday before or after those dates, given Reformation Day is observed in Protestant Churches on 31 October. Typically, “A Mighty Fortress is Our God” by Martin Luther is sung during the service.

Besides discussing Luther’s role in the Protestant Reformation, some recognition of the prominent early leaders of the Reformed tradition, such as John Calvin and John Knox, occurs. The observance of Reformation Day may be immediately followed by a reading of those members of the local congregation who have died in the past year in observance of All Saints’ Day. Otherwise, the recognition of deceased church members occurs at another designated portion of the service.