Hello Friends. Here are Inspirational Quotes about Divorce and Children to cheer you up and boost your personal mental peace in your family relationship. 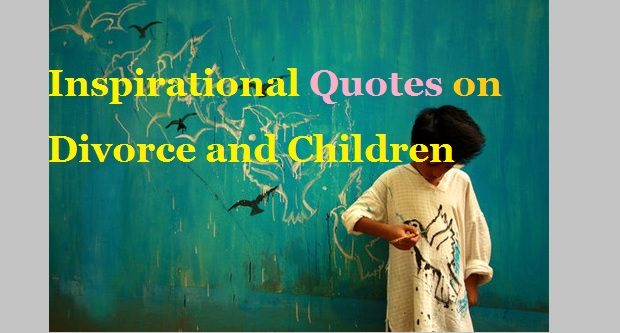 Inspirational quotes about divorce and children

“Tis better to have loved and lost than never to have loved at all.”
~ Alfred Lord Tennyson
My child will be better off if “he/she” is out of the picture.
“You have to forgive to forget, and forget, to feel again.”
~ Unknown

Elizabeth Marquardt says children of divorced parents are more apt than those living in intact families to feel divided between two homes with different values.

Divorce isn’t such a tragedy. A tragedy’s staying in an unhappy marriage, teaching your children the wrong things about love. Nobody ever died of divorce.”
― Jennifer
“Children ought not to be victims of the choices adults make for them,” said Wade Horn

“Your relationship may be “Breaking Up,” but you won’t be “Breaking Down.” If anything youre correcting a mistake that was hurting four people, you and the person youre with, not to mention the two people who you were destined to meet.”
~ D. Ivan Young, in “Break Up, Don’t Break Down”

What we wait around a lifetime for with one person, we can find in a moment with someone else.”
― Stephanie Klein,
“When one door closes, another opens; but we often look so long and so regretfully upon the closed door that we do not see the one which has opened for us.”

~ Alexander Graham Bell
“Americans, who make more of marrying for love than any other people, also break up more of their marriages, but the figure reflects not so much the failure of love as the determination of people not to live without it.”
~ Morton Hunt

Quotes about divorce and starting over

“My experience is that divorce is almost always unilateral. It’s not a democracy. One person gets to decide the fate of not only the marriage but the family,” said Michelle Weiner Davis

I’m not sure when we decided that divorce was “best for the kids,” but we sure act on that assumption a lot in America (so do lots of other countries). However, most of the time it’s just not true. There are circumstances when divorce is “the lesser of two evils” (especially when violence or abuse is occurring in the home), but generally speaking, it is not best for the children. Not even in remarriage.

Read Happy Divorce Quotes for men and women
“But in the real world, you couldnt really just split a family down the middle, mom on one side, dad the other, with the child equally divided between. It was like when you ripped a piece of paper into two: no matter how you tried, the seams never fit exactly right again. It was what you couldn’t see, those tiniest of pieces, that were lost in the severing, and their absence kept everything from being complete.”
― Sarah Dessen,

“In college, I had a course in Latin, and one day the word “divorce” came up. I always figured it came from some root that meant “divide.” In truth, it comes from “divertere,” which means “to divert.”