Hi Friends ! Welcome to 123greetingsquotes.com. September 16 is declared as the International Ozone Day (International Day for the Preservation of Ozone layer) by the United Nations and is celebrated across the planet as a day for generating awareness on the delicate ozone layer that surrounds the Earth and protects us from harmful solar radiations. Ozone, a triatomic molecule consisting of three Oxygen molecules is a pollutant in the lower atmosphere (“bad ozone”) and poses health and environmental risks. However, ozone in the upper atmosphere is critical to our existence (“good ozone”) as it prevents potentially damaging electromagnetic radiation from reaching the Earth’s surface. . It may be noted that excess ozone in the lower atmosphere is a result of anthropogenic pollution (in addition to volcanic activity) which leads to its formation through a series of reactions. Ozone in the upper atmosphere is naturally occurring.

This year’s International Day for the Preservation of the Ozone Layer on 16 September The theme for 2014 is:

While the ozone layer in the upper atmosphere is a essential to life on the planet, the discovery of a spring-time depletion of ozone layer above Antarctica in 1985 demonstrated the vulnerability of the ozone layer to human actions. Further investigation found that the ozone layer was being destroyed because of the release of chlorofluorocarbons (CFCs), mostly in the northern hemisphere. The CFCs once released from anthropogenic processes, spread throughout the world and diffused into the upper atmosphere, where they are broke down to release chlorine. This chlorine was able to take part in complex catalytic chemical reactions which was destroying ozone leading to the creation of the ozone hole. Once the science was clear, nations around the world began taking measures to phase out the use and release of CFCs.
Ozone pollution in the troposphere and its destruction in the stratosphere and all other air pollution is mainly the result of human activities. The small things you do every day can help reduce air pollution and hence improve the protection of the environment as well as human health. Emissions from automobiles is one of the main contributor of this
Don’t leave your electronic devices – TV sets, computers, DVDs on stand-by mode. Switch them off completely and you will save about 10 % of your electricity bill. Less electricity consumed means less power produced and fewer pollutants into the air from burning of fossil fuels
We all know HEALTH IS WEALTH….so by following simple steps we ll not only be living a healthy life but will also be gifting posterity a beautiful tomorrow.
WE at SANIDHYA are making a small contribution through spreading awareness on this day…
we request you to support the cause to make our EARTH a healthy planet….SAVE EARTH SAVE OZONE ! 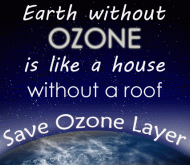 Ozone layer serves a beneficial role by screening out the sun’s harmful ultraviolet rays, expose to which can threaten the health of humans and wildlife, and reduce agricultural productivity.
Life on Earth depends in part on a thin shell of gaseous ozone that stretches from about 10 to 25 miles above our heads, encompassing the planet like an invisible, protective shield. At this altitude, it lies well above the height at which normal commercial aircraft fly, and far beneath the orbital paths of spacecraft. The ozone layer is the main barrier between us and the hazardous ultraviolet radiation that streams toward the Earth, day in and day out, from the burning surface of the Sun. Ozone–a form of oxygen–is selective in what it takes from sunlight: screening out, through a process of atomic absorption, only the more energetic ultraviolet rays while allowing the visible light and the warm infrared to pass through, untouched Source(s)

In the 1970s, scientists first grew concerned that certain chemicals could damage the Earth’s protective ozone layer. In the early 1980s, these concerns were validated by the discovery that the ozone layer in the stratosphere over Antarctica was thinning. While the ozone did not completely disappear in this area, it was so thin that scientists and the popular press started talking about an “ozone hole” Exit EPA Disclaimer.

A compromised ozone layer – and the resulting increase in ultraviolet (UV) radiation hitting the Earth’s surface – can have serious consequences. Overexposure to UV radiation in humans can cause a range of health and environmental effects, including skin damage (skin cancers and premature aging), eye damage (including cataracts), and suppression of the immune system. Scientific studies also suggest a link between ultraviolet radiation and adverse effects on some animal and plant life and some plastic materials.

Because of the risks posed by ozone depletion, leaders from many countries decided to craft a workable solution. Since 1987, 191 nations – almost every country in the world – have ratified a landmark environmental treaty, the Montreal Protocol on Substances that Deplete the Ozone Layer. The Protocol’s chief aim is to reduce and eventually eliminate the production and use of man-made ozone depleting substances (ODS). By agreeing to the terms of the Montreal Protocol, signatory nations – including the United States – committed to take actions to protect the ozone layer, hoping in the long-term to reverse the damage that had been done by the use of ozone depleting substances. How to protect the ozone layer?