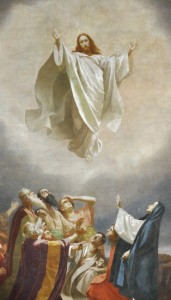 What is Ascension Day?

After Jesus rose from the dead, He “presented Himself alive” (Acts 1:3) to the women near the tomb (Matthew 28:9-10), to His disciples (Luke 24:36-43), and to more than 500 others (1 Corinthians 15:6). In the days following His resurrection, Jesus taught His disciples about the kingdom of God (Acts 1:3).
Forty days after the resurrection, Jesus and His disciples went to Mount Olivet, near Jerusalem. There, Jesus promised His followers that they would soon receive the Holy Spirit, and He instructed them to remain in Jerusalem until the Spirit had come. Then Jesus blessed them, and as He gave the blessing, He began to ascend into heaven.
It signaled the end of His earthly ministry. God the Father had lovingly sent His Son into the world at Bethlehem, and now the Son was returning to the Father. The period of human limitation was at an end.
It signified success in His earthly work. All that He had come to do, He had accomplished.

The canonical gospels include two brief descriptions of the ascension of Jesus in Luke 24:50-53 and Mark 16:19. A more detailed account of Jesus’ bodily Ascension into the clouds is then given in the Acts of the Apostles
In the Gospel of Mark 16:14, after the resurrection, Jesus “was manifested unto the eleven themselves as they sat at meat; …”. At the meal, Jesus said to them, “Go ye into all the world, and preach the gospel to the whole creation.” (Mark 16:15) Following this the Ascension is described in Mark 16:19 as follows:”after he had spoken unto them, was received up into heaven, and sat down at the right hand of God.”

Hail the day that sees Him rise,
Ravished from our wistful eyes!
Christ, awhile to mortals given,
Re-ascends His native heaven.

There the glorious triumph waits,
Lift your heads, eternal gates!
Wide unfold the radiant scene,
Take the King of glory in!
Wesley.

Jesus went away not only to prepare a place for us, so that it will be ready for us as one by one we go home, but to prepare us for the place, to fit us for heavenly enjoyments and heavenly service.
Peloubet.

And it came to pass while He blessed them, He was parted from them, and carried up into heaven.
Bible.

So then after the Lord had spoken unto them, He was received up into heaven, and sat on the right hand of God.
Bible.

He is taken up, that He may fulfill His design in dying, and give the work of our salvation its last completing act.
John Flavel.

His ascension is not His separation from His people, but the ascension of His throne and the beginning of His reign as the head of the Church which “is His body, the fulness of Him that filleth all in all.”
Rev. Com.

Christ “ascended,” not to depart from earth, but to take the throne of His Kingdom on earth. “He sat down at the right hand of God.” God’s reign does not consist in sitting upon a distant throne! It consists in omnipresent power and authority. To sit at His right hand means to share His Authority and Omnipresence.
Talmadge Root.

Here was a magnificent triumph over the law of gravitation. Here was the royal ascent by which our Solomon went up to the house of the Lord. The everlasting gates lifted up their heads and the King of Glory entered in. It was all of a piece—His life, His death, His resurrection, His ascension, all were triumphs.
Rev. C. P. Eldridge.
The ascension of Elijah may be compared to the flight of a bird, which none can follow; the ascension of Christ is, as it were, a bridge between earth and heaven, laid down for all who are drawn to Him by His earthly existence.
Baumgarten.
When we see the only-begotten Son, clothed in a body like our own, exalted above all the heavens, in that sight we have before us the all-glorious and controlling center of all the spheres, the key which interprets the testimony of prophecy, the gathered first fruits of a new and redeemed world.
W. Pulsford.

Why do we celebrate Ascension Day?

We celebrate this day the Ascension of our great Judge into heaven, where He sits upon His throne and has all the world before Him; every human soul, with its desires and aims, its thoughts, words, and works, whether they be good or bad. Every man who is running now his mortal race is from first to last before the eye of Him who as on this day ascended with human nature into heaven. Shall we grieve that the Visible Presence is withdrawn, and that there is no longer on earth the mighty and mysterious Personage who put away sin by the sacrifice of Himself and discomfited through dying the enemies of God and man? Not so! There is no reason for sorrow that He quits the earth on the wings of the wind. We could not detain Him below, we would have Him as our Mediator within the veil. This and this only, can secure to us those spiritual assistances through which we ourselves may climb the firmament

Jesus Christ, mediator and high priest,
we thank you for becoming human
and for experiencing the joys and sorrows of life,
which assures us that you are able to sympathize and rejoice with us.
We praise you for the many joys of life:
for the beauty of creation,
for your work in this world,
for the growth of your kingdom,
for the greatest source of our happiness:
the gift of eternal life.

As our mediator, you stand before God,
petitioning him on our behalf,
so we boldly bring before you our prayers for
creation and its care,
for the nations of the world,
for our nation and its leaders,
for this community and those in authority,
for the church universal as it works on your behalf,
for this local church in its ministry,
for persons with particular needs.

We pray this in your strong name, O Christ,
our mediator and high priest. Amen.

Blessed are you, Lord of heaven and earth,
to you be glory and praise for ever.
From the darkness of death you have raised your Christ
to the right hand of your majesty on high.
The pioneer of our faith, his passion accomplished,
has opened for us the way to heaven
and sends on us the promised Spirit.
May we be ready to follow the Way
and so be brought to the glory of his presence
where songs of triumph for ever sound:
Blessed be God, Father, Son and Holy Spirit.
AllBlessed be God for ever.

The opening prayer may be said

The night has passed, and the day lies open before us;
let us pray with one heart and mind.

As we rejoice in the gift of this new day,
so may the light of your presence, O God,
set our hearts on fire with love for you;
now and for ever.
AllAmen.