Hello pals, Here are wonderful Most Interesting Man in the World Quotes 211 collection for you. You can add more in the comments to help us 🙂

The Hunger Games volunteered for him

His is the only DNA ever found on the Shroud of Turin. Oddly, it dates from the early 15th century.

This fictional man could be considered to be absolutely fascinating indeed, that is if he was any different from the usual old geezer… but no, the marketers have bimbos hanging on his arm and his every word… young women “who are”, as is usually the case in real life, hoping to profit from an acquaintance with the most interesting man in the world. These otherwise very cool commercials unfortunately prove the addage “there’s no fool like an old fool” even if he is a good looking, amazingly interesting man of the world. 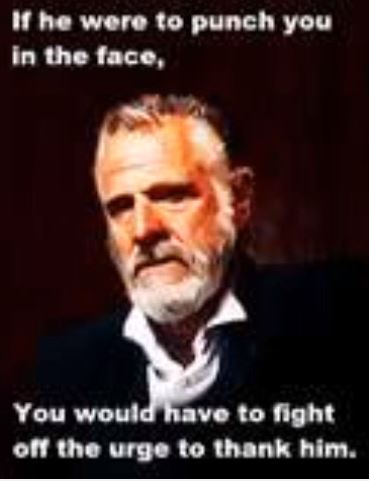 His blood smells like cologne
On every continent in the world, there is a sandwich named after him. His hands feel like rich brown suede

Mosquitoes refuse to bite him purely out of respect

He is fluent in all languages, including three that he only speaks

Once while sailing around the world, he discovered a short cut

Panhandlers give him money

When he goes to Spain, he chases the bulls

His shadow has been on the ‘best dressed’ list twice

He never has to slide his credit card at the fuel pump at the gas station, he just puts the pump in the tank and he pumps fuel for free!

His beard has it’s own email address and zip code!

He can heal flesh wounds with mustard!

He makes a psychiatrist go to therapy!

He single handedly took down napoleon, hitler, and fidel castro by flicking his beard and laughing at each one hysterically!

He has played baseball and swung the bat for 20 years and has never struck out!

He makes better ramen noodles than the finest asian restaurants!

His ex wife gave him a Husband of the Year trophy.

Out of respect, snow refuse to fall on his porch and driveway

Cars get nervous when he drives them; they fear the humiliation of running low on gas

He once won a NFL fantasy football CHAMPIONSHIP, with a WNBA roster

He once ran a marathon, backwards, to see what second place looked like.

He once bit a shark back
Rattlesnacks claim he tastes like chicken
He cured Typhoid Mary with a serum made from honey, apple cider vinegar and ketchup.
He once taught a hummingbird how to yodel.
Once, when he wore his thong bathing suit,three ladies and a male lifeguard fainted.
Fear Itself has nothing to fear but Him.
When he holds a lady’s purse, he looks manly
Two countries went to war to dispute HIS nationality
He calls the doctor if his erection DOESN’T last four hours or more.

When in Rome, they do as HE does
His pillow is cool on BOTH sides
The Nobel Academy was awarded a prize from HIM
While swimming off the coast of Australia, he once scratched the underbelly of the Great White with his right han
He taught Chuck Norris martial arts
Time waits on no one, but him

Once while sailing around the world, he discovered a short cut.

Panhandlers give him money.

He divorced his wife because he caught her littering.

His passport requires no photograph.

When he drives a new car off the lot, it increases in value.

Once he ran a marathon because it was “on the way”

His mother has a tattoo that says “Son”

The star on his Christmas tree is tracked by NASA

when ever he goes deer hunting,all of the deer play dead

Presidents take his birthday off

He has never walked into a spider web

He is left handed. And right handed

His words carry weight that would break a lesser man’s jaw.

The police often question him, just because they find him interesting

He doesn’t believe in using oven mitts, nor potholders

His cereal never gets soggy. It sits there, staying crispy, just for him

He once chastised himself, then later apologized.

A disparaging remark to him from a drunk Russian sailor almost caused an international incident, in Cuba.

The Pope once kissed his ring.

He can spy on the NSA with an 8 ball.

He knows what the fox says

When he dreams, it’s not only in color, but IMAX 3D.

He once found the fountain of youth, but he didn’t drink cause he wasn’t thirsty.

Putin gave him a Gold Medal just for attending the Olympics.

Most Interesting Man in the World Quotes

While in the military, he taught sniper’s to shoot from point blank range….UNDETECTED!!!

Whenever he is driving down the street, potholes move out of his way.

He can get to the north pole bye heading west…

He apples his decore

He has a drug sniffing dog as his dealer

it had never been “his bad”

He has a “safe word” for phone sex.

The blarney stone french kissed HIM

He once wrote a check and the bank bounced!!

Top Most Interesting Man in the World Quotes

He once engaged in horseplay, and the horses lost.

The handsomest man in the world walked in on his wife (the most beautiful woman in the world) and him in bed. The husband would immediately understand

He once visited the Virgin Islands. Now they are just called “The Islands.”
He once parallel parked a freight train.

His words hold so much weight they would break a lesser mans jaw.
His eyes are corrective lenses for his glasses

The song “You had a bad day puzzles him”…

If he were ever to suddenly find himself half the man he used to be it would still be so much more than any other man
He once led a horse to water….and made it drink
He doesn’t wait for a sunrise, the sun waits HIM to rise.

The most interesting man in the world has Santa Claus worried about being on his naughty or nice list….. Merry Christmas my friends……

Even his tree houses have fully finished basements

If he were to say something costs an arm and a leg, it would

He chose Marianne AND Ginger, AT the sametime!

He is the life of parties that he has never attended

Africa into all parts of the world. On close inspection, it turned out that the prints were his

He once caught the Loch Ness Monster….with a cane pole, but threw it back

His wallet is woven out of chupacabra leather

He played a game of Russian Roulette with a fully loaded magnum, and won

The Most Interesting Man in the World Quotes

If he was to pat you on the back, you would list it on your resume

Cars look both ways for him, before driving down a street

he doesn’t have to buy beer,he owns the franchise

The Kardashians Keep Up With Him

He Won A Heisman….As A Equipment Manager

All 5 Dentists Recommend Him

When he attends a Super Bowl, He’s The Super Bowl MVP

Max Martin Gets Songwriting Advice from Him

Pilots wait for him to Turn Off The Seat Belt Sign

He Gets Free Wifi in Dead Zones

It’s Always Sunny wherever he goes

He Wins The Triple Crown…..Just By Attending The Races

He’s The Team Captain…For All Teams

He Has a Visitor’s Pass from Area 51

He Got His Drivers License…When He Was Born

4th Of July Firework Shows Wait For Him

He’s The Ace For Every Baseball Team

He once tried to acquire a cold just to see what it felt like, but it didn’t take

He has inside jokes with people he’s never met.

he once knocked out a ghost with his invisible punch !

While a congressman, he was allowed to veto bills, not the president.
When he barks at dogs, they give him treats.

Most Interesting Man in the World Quotes 211
His x rays are in the Smithsonian.
He taught Lindbergh how to fly.
He does not have electricity. The lights come on when he walks into the room.
Cars are named after him. But he doesn’t drive. he doesn’t need to.
He had a hole in one. On all 18 holes.
He fills put his NCAA bracket one year in advance. And he always wins.
He doesn’t need insurance. He’s never had an accident.

He dropped himself on Nagasaki, thus getting Japan to surrender.

He won the gold medal at the Olympics. The silver and bronze too. All in the same event.

Rex Exen on March 27 2014 at 04:28PM
His dinner toasts have been written into the national archives.

He taught the Pope to do the Twist.

He has a pet grizzly just to keep his pet gorilla company while he is away.

The list of his collection of fine wines is protected under national security.

He plays dodge ball by himself.

When visiting a bowling alley the pins fall over before he throws the ball.

After the movie ended, everyone left the theatre. He was still in his chair. The usher simply acknowledged his presence.

He Invented The Color Blue

He once stopped a tidal wave…….by waving back.

He can align the planets simply by staring into space.

When he worked for the fire department, he never used water on the fire. He just stood there and the fire went out.

He once parallel parked a train.

He calls a physician when his erection does not last for more than FOUR hours.
he makes all the answers for Jeopardy.

He calls a physician when his erection doesn’t last 4 hours or longer.
His 2¢ is worth $35 and change.

He once had a wardrobe malfunction. Three ladies fainted.

He once gave his guardian angel CPR.

Speed bumps will flatten before he approaches them…and rise again after he passes them.