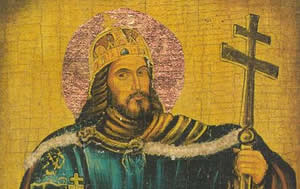 What Date Is St Stephens Day in Hungary?

St. Stephen’s Day is celebrated in Hungary on 20 August each year. It is also known as Foundation Day, Constitution Day, National Day and the ‘Day Of The New Bread’.

Is it a Holiday?

Yes it is a National Holiday in Hungary

Why is this Celebrated?

St. Stephen of Hungary (Szent István király) was the first king of Hungary and he laid the foundation of the state by converting the Magyar people to Christianity.

After a serious military loss in 955 AD, Hungarian tribal leaders decided to abandon their nomadic existence. Stephen, the Grand Prince of the Hungarians, realised that conversion to Christianity would be a way of strengthening the idea of Hungarian nationhood. He received a crown from Pope Sylvester II becoming Hungary’s first king in 1000 AD, ruling until his death on 15 August 1038. The Holy Crown has survived the centuries since and it is now Hungary’s most precious treasure.

Stephen became a saint on 20 August 1083. He became the patron saint of Hungary. As part of the canonization process King Stephen’s remains were dug up and legend has it that his right hand had not decayed at all. The hand was removed from the body and can still be seen in St. Stephen’s Basilica in Budapest.

Until 1687, 20 August was St. Stephens feast day and thus became Hungary’s national day, even after the feast day itself was switched around in the calendar a few times. In 1945 Communist leaders prohibited celebrations due to its religious nature and in 1950 it was changed to Constitution Day in 1950. It was reinstated as a celebration of St. Stephen in 1990 by the Hungarian Parliament.
,
The highlight of the St. Stephen’s Day celebration is a massive fireworks display on the bank of the Danube in the evening.

August 20th is the greatest national holiday for Hungarians, celebrated with day-long festivities followed by spectacular fireworks throughout the country. August 20th commemorates the foundation of the Hungarian state, it’s like Hungary’s 4th of July. Also called as St. Stephen’s Day, remembering Stephen I, the first king of Hungary and founder of the Kingdom of Hungary, who was canonized on August 20th, 1083 by Pope Gregory VII.

Festivities start in the morning with the raising of the Hungarian flag and continue on all day long, culminating in a spectacular fireworks display over the Danube.

In 2014, the August 20th celebrations begin on the 19th with a cake cutting ceremony at 10 am. It has now become a tradition to select an official cake for Hungary. Visitors to the ‘Street of Hungarian Flavors’ (Magyar Ízek Utcája) on the Danube embankment can enjoy a slice. Celebrations continue on the 20th with the raising of the Hungarian flag (8:30 am to 10 am) in Kossuth tér, an open day at the Parliament (10 am to 4 pm), and many other programs. Some of the highlights are:

Where: both embankments of the river Danube
When: from 9 pm

The Festival of Folk Arts, held in Buda Castle, is also celebrated over the St Stephen’s Day weekend.

St. Stephen’s Day also marks the festival of the new bread celebrated in cities and towns across the country. Traditionally, the first bread from the new harvest is baked on this day.