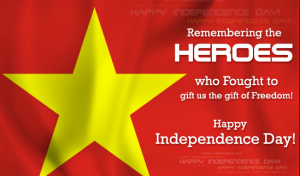 Vietnamese people celebrate National Day with proud on 2nd September. People across Vietnam are celebrating the 69th anniversary of the August 1945 Revolution and National Day (Sept. 2) with memories of the previous landmarks and with full pride of their socio-economic development achieved over the past years.

The Japanese occupied Vietnam during World War II but allowed the French to remain and exert some influence. At the war’s end in August 1945, a power vacuum was created in Vietnam. Capitalizing on this, the Việt Minh launched the “August Revolution” across the country to seize government offices. Emperor Bảo Đại abdicated on August 25, 1945, ending the Nguyễn Dynasty. On September 2, 1945, at Ba Đình Square, Ho Chi Minh, leader of the communist Viet Minh organization, declared Vietnam’s independence under the new name of the Democratic Republic of Vietnam (DRVN) in a speech that invoked the United States Declaration of Independence and the French Revolution’s Declaration of the Rights of Man and of the Citizen. In Autumn 1945, the Vietnamese people, under the banner of the Communist Party of Vietnam, achieved a resounding victory with the August Revolution, which finally broke the yoke of both colonialism and feudalism.

The victory brought back national independence to the nation and gave birth to the Democratic Republic of Vietnam — a state of the people and for the people — and the first ever of its kind in Southeast Asia.

With this monumental and historical victory from slavery, the Vietnamese people became not only masters of their nation, but also their destiny.

“On Sept. 2, 1945, at Ba Dinh Square in Hanoi, President Ho Chi Minh solemnly declared to the world the birth of a free and independent Vietnam, and since that historical landmark, Sept. 2 has become our National Day (or Independence Day), which is always of special significance to all Vietnamese,” Cao Viet Duong, 78, a war veteran told Xinhua a few days ahead of the holiday.

The veteran said that he was only three years old on that historical date, so he knew about it through his parents’ recollections and from history lessons at school. But in later years he could fully understand how it was so important to all Vietnamese citizens, including himself.

“Nearly 70 years have passed, and during that time, I had several occasions to join my countrymen in celebrating the Independence Day on Sept. 2, among which the most impressive was that in 1975 after Vietnam was reunified,” Duong said.

Vietnam held a big parade on Sept. 2, 1975, to celebrate the country’s reunification after decades of fighting against foreign invaders. Duong said he was then in the army and selected to join the artillery troops in the parade.

“I felt so proud of being among the witnesses to that historical event. The entire Ba Dinh Square was flooded with flowers, flags and people. When marching in the line with my comrades-in-arms across the main podium and along streets crowded with many spectators, I was very happy for being a citizen of an independent country, and at the same time I felt a heavy responsibility for my obligation towards the homeland,” the war veteran said.

To prepare for the parade, Duong and his unit mates had to train marching in steps for about 15 km a day, under the scorching heat or in heavy rain.

“But we all undertook that with a lot of pride, knowing that we are representatives of heroic Vietnamese soldiers,” he said with a broad smile.

The senior veteran showed Xinhua reporters a pair of black leather boots and a wooden stick tied with strings on both ends, with which he used during the four months of training before the parade (the stick was replaced with a gun at the official parade). Being kept carefully in a wooden closet at home, Duong said, they became valuable artifacts during his army life.

Duong demobilized from the army in 1991 after 33 years in service, during which he witnessed six parades on the historical Ba Dinh Square. However, he said, the parade on Sept. 2, 1975 was the most unforgettable event in his life.

The veteran is now living in the capital of Hanoi, together with his wife, two children and three grandchildren. Every year, on the Independence Day, the entire family used to go to Ba Dinh Square to join the celebratory events, taking pictures and meeting old friends. It was also a chance for him to recall memories of the previous historical events and pass these on to the younger generations, as well as to witness changes in the country’s socio- economic development.

“Over the past decades, we, Vietnamese, have overcome numerous difficulties and challenges to build and develop our homeland. The past thirty years of large and significant advancements has made us particularly proud, and the overall renewal achieved has filled us with a sense of satisfaction and has gained the admiration of international friends,” the veteran told Xinhua.

In 1986, Vietnam embarked on the renovation process with open- door economic policies that helped the country further integrate into the world’s community. Over the years, the country’s Gross Domestic Product (GDP) has increased, helping to improve the people’s living conditions.

September 2 is celebrated as Vietnam’s Independence Day. In 1945, Ho Chi Minh declared Vietnam’s independence in a speech. The French, however, did not relinquish their former colony without a fight. In 1954, after many negotiations and battles, the French were defeated. Ho controlled North Vietnam and Ngo Dinh Diem eventually controlled the Republic of Vietnam (South Vietnam). In 1956, Diem refused to hold a scheduled election to unite the states. Civil war ensued, continuing with international help until 1976, when the North Vietnamese were victorious.

Although Ho died on September 2, 1969, his presence pervades Vietnam. Despite winning independence, cultural legacies from France, as well as from Russia and the United States, influence the Vietnamese today.

“From a country facing shortage of food with imports of up to 1 million tons each year, since 2005 Vietnam has ranked among the world’s top exporters of rice, coffee, rubber, cashew nuts and pepper. The government has set goals to become an industrialized and modernized country by 2020, and we have rendered all efforts to realize them,” said the veteran.

Independence day is a
good time to examine
who we are and how we got here.

September 2nd, 1945 is an important landmark marking a major turning point of Vietnam. It was an establishment day of the Democratic Republic of Vietnam and is also considered the National Independence Day of the current Socialist Republic of Vietnam. President Ho Chi Minh read the Declaration of Independence at Ba Dinh Square, officially claiming the independence and sovereignty of Vietnam from France and Japan.
As a typical National Day, Vietnamese has a day-break from work to commemorate the event’s historical significance. A notable sign for the cheerful spirit of the day is the appearance of Vietnam flags everywhere, coloring the whole country with lively red backgrounds and jovial yellow stars. The streets are exploded with a boom of red and yellow banners of celebrations and oversized posters of Uncle Ho speaking into a microphone in 1945.